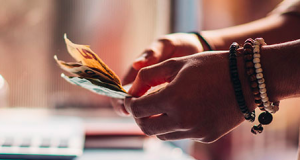 High costs and poor user experiences built on legacy systems are just a few of the reasons so many fintech startups are targeting the remittance space.

But what also makes it so appealing for would-be disruptors is just how massive the market is, with the World Bank estimating it to be a $600bn industry.

Somaliland-born founder of London-based remittance player WorldRemit, Ismail Ahmed, believes it could be worth a lot more.

Speaking at TechCrunch Disrupt in London he pointed out that “a big chunk of remittances still go through informal channels that are hard to estimate. The actual size of the market is much bigger than $600bn”.

He adds that these informal channels and underground networks moving money across boarders make it difficult to know just how large the market truly is but one thing Ahmed is certain of is that it’s growing.

He said, “There are 250 million people who live outside their home countries and migration is still continuing. That has been the case the last 30 to 40 years and it’s growing 7% to 8% every year.”

Where this migration and the subsequent flow of money takes place is also not as obvious as it might seem.

Ahmed said, “We often hear about migration as people coming to the US or Europe but the bulk of migration is in the southern hemisphere. A big chunk of remittances flow between developing countries.”

WorldRemit, however, is going after the money flowing to consumers in developing markets who are excluded from traditional financial services.

“Most of the recipients are unbanked,” said Ahmed.

“There are two billion people who are unbanked, whose lives revolve around cash, saving money under the mattress, but this is now changing because of mobile money services.

“That’s somebody with a basic feature phone who can open an account with their mobile number.”

Ahmed claimed there are now more than 411 million Indian consumers with mobile money accounts, and these are the services with which WorldRemit seeks to partner as global remittance shifts away from cash.

“When we launched five years ago 100% of our transactions were cash at the received side,” said Ahmed.

“That has now changed and about two-thirds of our transactions are digital because of mobile money services.”

One of the most-successful of these mobile money services is Kenyan service M-Pesa.

Its home market has seen the greatest adoption, with 42% of the region’s GDP reportedly moving through the service last year.

M-Pesa was the first of these telecom-backed mobile money services WorldRemit looked to partner with, and today it works with 274 – with another 100 currently being launched.

What Ahmed said makes these services particularly disruptive in emerging markets is that they are “financial services not run by banks but by telecoms who know their customers better”.

He said the customers this allows WorldRemit to serve are those at the “bottom of the pyramid who have been exclude by banks”.

These mobile money services combined with innovation in remittances is bringing a much greater level of financial inclusion and ensuring the money WorldRemit users send home gets to their intended recipient.

Ahmed described how previously remittances where sent to physical locations in capital cities and would cost someone between $13 and $15 to cover the costs of driving and collecting just $100 – with middle men often taking a cut.

He claimed, “the global money services have removed the man in the middle who used to go collect the cash.”

This means it is often women who are empowered the most by these inclusion-focused startups in being able to receive money directly to a feature phone.

The real traction seen by these services means that some emerging markets have “leapfrogged straight to what are becoming cashless economies”, said Ahmed.

This means consumers are bypassing legacy players such as VISA and MasterCard which Ahmed said “have tried to replicate what they have here in the developing economies”.

Naturally, these incumbents are pressuring governments to force these companies to work with central banks.

It’s the Kenyan Central Bank’s decision to allowed M-Pesa to continue operating as it does, however, that is facilitating growing financial inclusion though fintech.

VISA and MasterCard have also sought to work in collaboration with banks to launch rival services and Ahmed said, “Card schemes wanted to replicate the services that have here [in developed markets] where you have to pay 3% to accept a payment but that hasn’t worked.”

The cost to governments of allowing illegal black market and unofficial remittances channels to operate means that they are willing to give these telecom-based, startup services freedom to grow.

Ahmed said, “I don’ think there is any regulator that would restrict the formal flow of remittances and that includes the US.

“I don’t think the flow of remittances between the US and Mexico would be stopped because of the costs of illegal, underground networks to governments and regulators.”