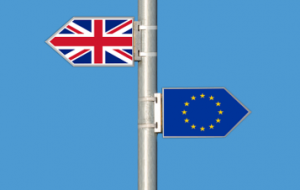 UK-based banks and startups alike are preparing for the potential economic turbulence Britain’s departure from the EU might bring – but it’s the latter that are best prepared to react.

Speaking at the FinTech Investor Forum, Azimo and Tandem Bank founder Michael Kent said the “people who are going to really struggle will be the big banks and institutions, who will be much slower at moving”.

By contrast he believes fintech entrepreneurs can “react to it fairly quickly”, giving them a significant advantage in handling any Brexit fallout.

That sentiment was echoed by consumer investing app Moo.la’s founder and CEO Gemma Godfrey, who said her company’s business remained unchanged in the wake of the June 23rd vote.

She pointed to the more agile nature of fintech startups compared to legacy institutions and said, “if you’re a fintech firm you’re smaller, you’re able to be more nimble. We’re not this heavy tanker ship which is hard to move.”

Ben Brabyn, head of Canary Wharf-based fintech accelerator Level39, also finds startups are worried about how the vote will impact their traditional banking partners or clients, adding that often it is earlier stage companies that find it easiest to adapt.

He said, “Some of the concerns expressed by companies in Level39 are actually not their own concerns but more representative of the organizations with which they partner – the bigger, more established institutions.”

It’s a more positive take on something that many founders see as a challenge to overcome rather than a beneficial opportunity for their businesses, with Kent branding Brexit “a disaster”.

Access to capital and talent are the areas the Brexit vote has sparked the greatest concerns for London’s fintech community – the same areas in which the government previously made efforts to help startups.

The changes Brexit could bring about means Kent is preparing to move remittance firm Azimo’s operations outside of the UK.

Other EU nations are keen to attract would-be emigrating businesses, and Kent said, “I met the mayor of Amsterdam and she’s very keen to roll out the red carpet.”

He doesn’t think passporting, which allows UK companies to conduct business across the EU, will survive, and says the company is “looking at setting up a regional hub and getting regulated for our European business somewhere else”.

He adds, “We’re currently a UK institution regulated by the financial regulation authority and we’ll keep that, but we’ll set up a new business probably in Dublin, Luxembourg or the Netherlands.

“It will probably see the majority of business because we have more European customers than British customers and we’ll start focusing there.”

In a year when investment into German fintech companies is expected to outpace that in the UK, the added uncertainty of Brexit is only making it more difficult for startups in the area to raise capital.

Brabyn attempted to highlight sustained investor interest in UK fintech, saying that following the money reveals, “there’s been more than £40m raised by companies in Level39 since the Brexit vote, that’s a strong indication of confidence”.

Kent, however, points out that, “a lot of those deals will have taken months and months to put together” and claims that he knows as many as 10 companies that are, “screaming for cash and really struggling because the funding in the UK has become much harder to get”.

She said, “be realistic with your valuations from the beginning because what you want to avoid are down round.

“Especially now as we move into more rocky territory potentially after Brexit and how much currency fluctuations may disincentives investors to come forward it’s important to be pragmatic and realistic with valuations.”

There are also promising signs for companies looking for future funding in the growing presence of strategic capital and Asian firms in the European and UK investment ecosystems.

“Every bank worth its salt has venture fund now,” says Kent.

“Insurance players are putting money in now. So there’s more people to meet.”

He says traditionally the company would look for capital in “the UK, maybe Germany, then the US.

“These days the US has been very turned off by Brexit but you can actually get on a plane and go to Asia or the Middle East a lot sooner than you might otherwise do so.”

The other major area of concern for any growing business is the impact changing border controls may have on access to the best talent.

It’s no exaggeration to say that many of London’s most promising tech startups run on European talent.

If the flow of tech talent into the UK is stemmed the costs of hiring the best developers will rise making it harder for startups to compete with cash-rich corporates.

Godfrey said, “We have a developer in Switzerland and his costs have gone up with every currency move.”

It’s leading companies to search further around the UK and Moo.la has, “just opened an office in Belfast with the help of the government over there.”

Godfrey says it’s a growing region as, “it’s in the UK but there’s a lot of government support there and a lot of businesses are saying that.”

It’s clear many fintech leaders believe Brexit will create challenges for their growing business but there is still optimism that London and the UK can retain its title as, arguably, the global hub of fintech.

Chishti says the vote, “sent the wrong signal out as a country. As an industry we’ve been given bad cards.”

But remains optimistic of the UK’s position, saying: “people look up to London as the global fintech hub.

“They admire what we’ve done here, the regulators and the ecosystem and they see us as the best hub globally and that hasn’t changed.

“We have to make sure we don’t lose that leadership position but also that we work together with other hubs to have a collaborative approach.”